I am making a bold prediction today.  I predict that Its a Great Pumpkin, Charlie Brown will outlast and outrun The Charlie Brown Christmas Special in network TV airtime.

First some history.  Its a Great Pumpkin, Charlie Brown was first aired in 1966 as part of three yearly holiday Peanuts TV specials created and produced by Mr. Charles M. Shultz.  The Charlie Brown Christmas Special aired one year earlier in 1965.  Both have run continuously since. 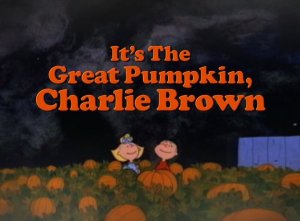 Its a Great Pumpkin, Charlie Brown will air tomorrow evening, October 31st, 2013 at 8/7c on ABC.  The Charlie Brown Christmas Special will certainly run sometime during the Christmas holiday season.  But for how long?

The main difference between the two holiday specials is found in one particular scene from the Charlie Brown Christmas Special.

Now infamously known as Linus’ Speech about the meaning of Christmas (see video below), the Christmas special has a uniquely Christian message.

It is the message that Christmas is not about presents, trees, Santa Claus or Rudolph the Red-Nosed Reindeer (no offense to Rudolph).  It is about the baby being born in Bethlehem, Jesus Christ, to the virgin named Mary,  while shepherds lay watching their sheep, angels singing “glory in the highest” and a bright star pierces the night sky.

Linus calls our attention back to the real meaning of Christmas, not the shopping spree, Black Friday craziness with a Griswold-like decorated house complete with strobe lights and Mannheim Steamroller background music.  Linus’ message is simple, to the point, and distinctly Christian.

I simply do not see ABC (or any other major network) continuing to air a special with this clear and present description of Christian, biblical principles to an American audience that is progressively more and more antithetical to such teaching.

Its a Great Pumpkin, Charlie Brown has little or no spiritual significance, which makes it more amiable to a more pluralistic society.  Actually with Halloween now eclipsing Easter and Thanksgiving as the No. 2 most celebrated holiday in America, it might be more interesting than ever to TV viewers.

In all, our culture is being stripped of all vestiges of Christian symbols, principles, and sentiments.  Charles Shultz was a born-again Christian.  He allowed his faith to find its way onto the comic strips that made him famous.  This continued in 1965 (consider that is now nearly 50 years ago) when he created the storyline for the Christmas special.  I honor him as a creator who sparked our imagination with great characters, stories, and obvious biblical principles.  Thank you Mr. Shultz.  You were a visionary and a prophet.

But what if a new cartoonist attempted the same thing in 2013?  Would a clearly, overtly Christian message be attempted and aired on a major TV network as a children’s special?  I seriously doubt it.

That is why It’s a Great Pumpkin, Charlie Brown will outrun and outlast its Christmas counterpart.  Maybe not this year, but coming soon to a TV listing near you.