My character’s name was Jake.  I had 10 lines.  Ten meaningful lines (at least in my mind they were).

The production had the whole kit and caboodle – full orchestra, large choir, multiple actors, sets, props, solos, spot lights, and our worship pastor directing in a tuxedo with baton in hand. 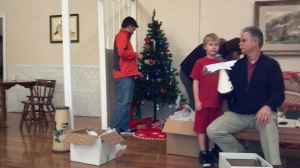 Running a Scene for “The Ornament” Christmas Play

Having now been in a Christmas pageant, I am still asking the same questions I was asking earlier this year.

In other words, I am still asking, “If we didn’t do the Christmas pageant, would anyone have noticed?”

Our church had three performances over the weekend – Friday, Saturday and Sunday.  The largest attendance was on Sunday night, the other two were pretty slim.

But then in contrast, there is the important question about giving musicians, actors, tech and construction people a chance to use their God-given talents and skills for His glory.  Those in vocational ministry are called to “equip the saints for the work of ministry” (Ephesians 4:12).  Shouldn’t we be looking for ways to equip others to serve using the talents and gifts God has blessed them with?

Even if huge numbers of people don’t come out, isn’t the time well spent working on a project together, growing in personal discipleship by being around other Christian people, attempting to build community and bonds of love between one another?

There is no question you grow closer to the people you do these productions with.  I got to know different people who were in the play with me better than I would have just attending church together.

Lastly, I found myself the whole weekend asking “What’s next Lord?”  We don’t do skits or sketches much any more, except in the Kids Ministry.  The Christmas/Easter pageant is slowing going the way of door-to-door evangelism.  What will replace these ministries in the future?

I’ve come to three conclusions.  Whatever “it” is in the future, “it” will be:

2.  More interactive and less observatory.  Just watching a play or performance is nice, but people want to have some part in it.  Most folks assume if they are going to the theater or concert hall, they are going to sit back and be entertained, but at church people are different.  They want to participate in some way.  Particularly the younger generations, they want to be a part the action, even if it is only a small part.

3.  More simple and less complex.  People are amazingly gracious when things are done simple.  But when any ministry attempts to be overly complex, the judgment factor skyrockets.

Consider a children’s presentation.  No one critiques the acting, the singing, or the costumes when kids are involved.  But if you attempt to be professional, highly complex, it seems everyone is a stage critic.  And practically speaking, regular working people do not have the free time necessary to give to a volunteer production if it is overly complex and technical.