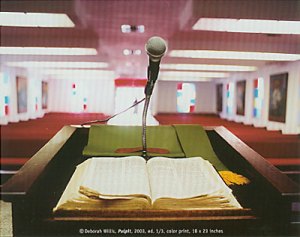 What should we call it?

What should we call the thing we preacher-types do during the worship service?

In the Catholic mass, it is called a homily.  This is where we get the term “homiletics” or the study of preaching.  A homily is not central to the Catholic mass, the Lords’ Supper is.  The homily is usually 10 to 15 minutes and the priest can choose any range of topics to speak on: the Bible, personal spiritual issues, political topics, or community affairs.

During the 19th and 20th century, Evangelicals and Protestants shifted away from the homily and took on the more prominent title of sermon.  The sermon replaced communion as the central act in the worship service.  It became the central teaching ministry of the church, over all others forms of discipleship.  The sermon length was longer, 30 to 50 minutes, and more directly tied to the explanation and application of the Word of God to the people of God.  Biblical literacy was on the rise and therefore a longer teaching time was necessary.

In more recent years, many pastors wanted to move away from the term “sermon” for something less pointed.  They have chosen the term message.  A message from the pastor seemed more acceptable to both believers and non-believers alike.  A message had a personal touch to it.  A message is the same length as the sermon, but more pastoral.  A message is less directed toward fiery evangelism and revivalism and more toward Christian discipleship and building up of the congregation.

In even more recent years, a new term has emerged for what preacher-types do: a talk.  I’ve heard younger preachers introduce their sermon with the phrase, “Today I am going to talk about…” or “My talk today focus on…”  If the sermon was too dogmatic and the message to therapeutic, then a talk might be in order.  A talk removes all the “Christianese” and places the pastor in the role of communicator.  A talk is asking for dialogue, interaction, and meaningful consideration of the content included in the talk.

What other words could we use?  I think the word speech is probably inappropriate for preaching.  Politicians give speeches, we are delivering the Word of God.  Prophetic word is tattered with all sorts of baggage of Pentecostalism and crazy street preachers.  The monologue is only appropriate for late night TV.

Could we go with the revelation, or the exposition of the Bible or the spoken word or just “preach’n” as my friend from North Carolina calls it.